M_OBS_SIM is a network simulator conceived to evaluate the performance of networks where the Optical Burst Switching (OBS) is implemented. Its accurate design allows to investigate the behavior of optical edge and core routers, as well to assess the performance of the whole optical network; its modular construction guarantees a high degree of flexibility and a facilitated introduction of further developments.

Through a tunable choice of its functional blocks, it has been possible to explore the effects that the most salient features of an OBS network - input traffic statistics, assembly algorithms, resource reservation policies, routing strategies - have on user performance, deriving new and valuable results for different classes of applications with diverse service requirements

M_OBS_SIM is an event-driven simulator, completely developed in C++, compliant to latest ISO/ANSI standards. Moreover, the code is higly reusable and easy to extend; these features, combined with a specific attention to execution times and with the adoption of the GCC 3 compilers suite, has brought M_OBS_SIM to a very satisfying level of completeness and speed.

Here it's possible to download an evaluation version of M_OBS_SIM.

This version investigates an European network, shown in the picture below. 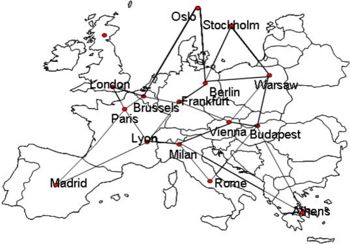 The traffic entering the edge nodes is made up of three distinct classes of IP datagrams: the corresponding percentages are class 1 = 0.5, class 2 = 0.2 and class 3 = 0.3. The duration of each datagram is Pareto distributed, and the average datagram size is 200 bytes for class 1, 576 bytes for class 2 and 1500 bytes for class 3; the interarrival time is exponential and it is the same for all three classes. The reservation policy we have chosen to investigate is JET. Correspondingly, three classes of outgoing bursts are created: class 1 burst are attributed the highest priority, class 2 and 3 are supposed to be loss-sensitive.

In this evaluation version in the edge nodes is used the Tmax Lmin assembly algorithm. The maximum assembly time Tmax is set equal to 1 ms for class 1 bursts and to 20 ms for class 2 and 3 bursts; Lmin has been set to 640 kbytes. In each M x M OBS core node M = 2 fibers are considered, with N = 16 wavelengths on each fiber; 32 wavelength converters are additionally available for class 1 and class 2 bursts. Dijkstra routing is adopted by all three classes, but class 2 and 3 bursts can also resort to deflection routing.

The following file is tgz compressed. After the decompression, it is possible to run the file in a Linux environment using the command ./gsim7. The program executes three iterations for every input offered load (0.2, 0.4, 0.6, 0.8) and produces some text files with the results of the simulation.