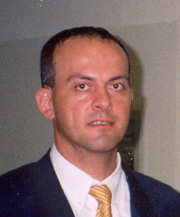 Antonio Massarini was born in Bolzano (Bozen), Italy, on May 2nd, 1962. He received the MS degree in Nuclear Engineering (cum laude) from the University of Bologna in February 1987 discussing a thesis about the Simulation of Transient Behaviour of a B.W.R. From November 1988 to October 1991, he was a Ph.D student at the Department of Electrical Engineering (DIE) of the University of Bologna. He received the Ph.D. degree in Electrical Engineering in September 1992 with a thesis entitled Quasi-onedimensional Models and Algorithms for the Analysis and Simulation of MHD linear channels. From January to December 1992, he was a post doc researcher at the Department of Electrical Engineering of the University of Bologna. From December 1992 till August 2000, he was an Assistant Professor of Electrotechnics at the School of Engineering, Department of Information Engineering of the University of Modena and Reggio Emilia, and since September 2000 he has been an Associate Professor. His current research interests include high frequency modelling of electrical components, numerical modelling, magnetic shielding, switching power converters, nonlinear circuits.